In the Flash version, this is the second episode which needs to be unlocked by getting three tickets from friends.

In HTML5, this is the first episode which either requires three tickets or complete three mystery quest levels to unlock. However, this is no longer the case after the map revamp.

Before episode:
Tiffi finds Mr. Yeti asleep on a mountain, thus she needs to find a way to wake him up.
After episode:
Eventually after shouting "Wake up!", Mr. Yeti wakes up and thanks Tiffi for doing so.

Chocolate Mountains is an easy episode, with a mean of 2.27, although it has three medium levels: 45, 46 and 50. In the past, there were several other hard levels, but they all got nerfed recently and therefore most other levels in this episode are quite easy. Overall, it is of the same difficulty as the previous episode, Lemonade Lake.

Mr Yeti, can you please help?

Mr Yeti, are you awake?

Mr Yeti is asleep. How can I wake him up?

Thanks for waking me up!

Yay! Everyone is happy!
Add a photo to this gallery 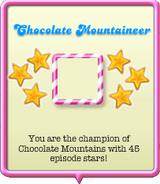 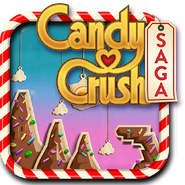