It is one of the most hated elements in the game as it creates chocolate which will swallow a candy that can block and disrupt their movement. It also cannot be destroyed. Therefore, the player can break every chocolate in his/her way, but he/she cannot prevent the chocolate spawner from generating chocolate (unless you use the bubblegum troll booster, which is only available on Flash). When there are two or more chocolate spawners, chocolate can be created on any square adjacent to a chocolate spawner.

Whenever there are chocolate spawners, but no chocolate (at level start or just after they were all removed), they will cease to generate chocolate for one move.

Because chocolate spawners cannot be destroyed, getting it from a mystery candy (only possible on Flash) can make a level impossible to win, especially when it comes out over a jelly, unless a jelly fish reaches it. However, chocolate spawners coming from mystery candies are incredibly rare, and never occurs on HTML5. When it happens, it will produce chocolate as soon as the move is finished if there is a square adjacent to it available, provided that this does not occur during Sugar Crush.

Ingredient levels can make it worse if an ingredient falls on top of a chocolate spawner. Some levels have them placed at a spot on a platform where an ingredient will start to drop. However, they cannot spawn any chocolate on the conveyor belt. This can be helpful or harmful for some levels such as level 569. In particular, it is a problem in level 1450 because the amount of chocolate which can be present is limited by the conveyor belt, requiring the player to clear some of the chocolate before allowing them to continue spawning.

On 10 February 2020, when Facebook version was upgraded to 1.170, the appearance of the blocker rolled out for Facebook users.[1]

Getting an chocolate spawner from a mystery egg on level 373

Chocolate spawners on level 334
Add a photo to this gallery 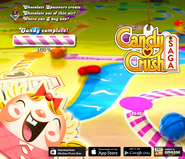 Retrieved from "https://candycrush.fandom.com/wiki/Chocolate_Spawner?oldid=1476611"
Community content is available under CC-BY-SA unless otherwise noted.