Citrus County is the 409th episode in Candy Crush Saga and the fourth episode of World 82 (HTML5). This episode was released on 25 December 2019. The champion title for this episode is Joyful Juicer.

Tiffi sells bottles of lemonade at her lemonade stand. 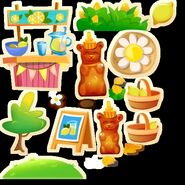