Not to be confused with the Monkey in the 43rd episode, Taffy Tropics.

Claude is a minor character in Candy Crush Saga. He is a mimer monkey that first appears in 85th episode, Bonbon Bistro. Before introducing level 1251, he entertains Tiffi.

He reappears in the 100th episode, Delicious Dynasty, costumed with different outfit (as The Monkey King) and skin colour.

In the 266th episode, Sticky Shore, he and Tiffi are at the beach. Tiffi eats a banana while he sets up a hammock that greatly resembles a banana.

Delicious Dynasty
Add a photo to this gallery 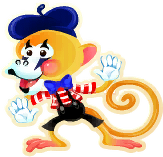 Character on map (before Bonbon Bistro)

Character on map (after Bonbon Bistro) 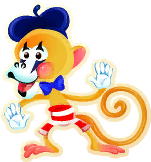 Character on map (Croissant Crossing)
Add a photo to this gallery
Retrieved from "https://candycrush.fandom.com/wiki/Claude?oldid=1656454"
Community content is available under CC-BY-SA unless otherwise noted.