Coco Crossroads is the 60th episode in Candy Crush Saga and the fifth and final episode of World 11 (HTML5). This episode was released on 18 March 2015. The champion title for this episode is Sweet Sibling.

Before episode:
Coco the little rainbow is crying because the arrows on the direction signpost are continuously spinning and does not know where to go.
After episode:
Tiffi goes away and brings a whistle. She blows it and a bigger Coco-looking rainbow, who is probably his father, arrives and causes the signpost directional arrows to stop spinning. Coco throws the umbrella to the bigger Coco-looking rainbow which responds by twitching his eyebrows. Coco becomes happy and strikes a pose.

Coco Crossroads is an easy episode, with a mean of 2.87. It contains one hard level: 881, and one extremely hard level: 887. Overall, it is easier than the previous episode, Truffle Terrace. 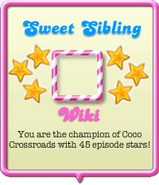 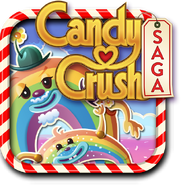