Cocoa Condo is the 457th episode in Candy Crush Saga and the second episode of World 92 (HTML5). This episode was released on 15 April 2020. The champion title for this episode is Charming Chocolatier.

Tiffi notices that one of Cherry Baroness's hats resembles a piece of dark chocolate. 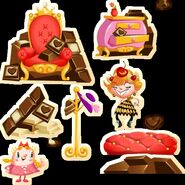