Cocoa Cove is the 180th episode in Candy Crush Saga and the third and final episode of World Fifty. This episode was released on 2 August 2017. The champion title for this episode is Diamond Digger.

Mary and Tiffi are standing on an island in the cove that resembles a treasure chest.

Cocoa Cove is statistically one of the hardest episodes in the game with a mean of 7.33. There is one hard level: 2689, two extremely hard levels: 2679 and 2690, and two nearly impossible levels: 2676 and 2686. The rest of the levels are rated "very hard". Overall, this is a nearly impossible episode; it is of similar difficulty to the previous one, Fabulous Fair. 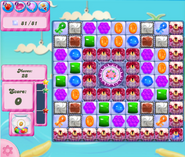 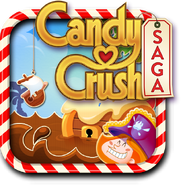 Retrieved from "https://candycrush.fandom.com/wiki/Cocoa_Cove?oldid=1652170"
Community content is available under CC-BY-SA unless otherwise noted.