Cocoa Crags is the 481st episode in Candy Crush Saga and the first episode of World 97 (HTML5). This episode was released on 10 June 2020. The champion title for this episode is Nutty Noble.

Tiffi and Count ride along the cliffs on their motorcycle. 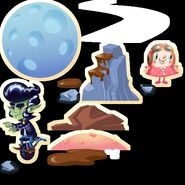 Retrieved from "https://candycrush.fandom.com/wiki/Cocoa_Crags?oldid=1717865"
Community content is available under CC-BY-SA unless otherwise noted.