Coconut Cruise is the 367th episode in Candy Crush Saga and the second episode of World 74 (HTML5). This episode was released on 25 September 2019. The champion title for this episode is Savvy Shipper.

Tiffi and Milly drink from coconuts on a tropical island. 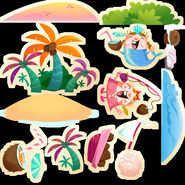