The conveyor belt (also known as the travelator) is a secondary element and another type of teleporter. Conveyor belts are officially seen in the 37th episode, Sticky Savannah, and the first official level is level 531.

There was a glitch that caused levels 126 and 127 to be registered as two different versions of level 1277. They were unofficially introduced in level 126 on mobile, but the glitch is fixed and they are introduced at level 531 normally on the mobile version.

The conveyor belt can be seen as another type of teleporter (vertical or horizontal). It can be seen as a row or column of arrows pointing in the same direction with portals (red, green, or blue) at either end. The portals are linked to each other so when a candy exits through one portal, it will appear through the other portal on the start of another conveyor belt, to form a conveyor belt system. After every move, the candies on the conveyor belt will move one space in the direction of the arrows. This can set off new cascades, especially on levels with fewer colours, and may generate extra sugar drops. Chocolate cannot cover candies on a conveyor belt. The only negative outcomes that can come out of Mystery Candy opened on a belt are swirls and bombs, and any possible outcome will not be in marmalade.

In the old version of levels 583 and 584, the conveyor belts don't have teleporters at each end. When a candy reaches the end of the belt, it just sits there and any candy pushed onto it afterwards disappears. In level 583 especially, this causes some pretty strange occurrences, where 2 belts without teleporters moving towards each other meet and push 2 candies simultaneously onto the same square, in which case the disappearing candy is random.

It used to appear in timed levels since level 1387, with each movement taking a few seconds off the clock. This is no longer true since timed levels have been removed. 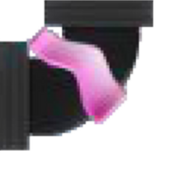