Cookie Cabana was the 11th episode in Dreamworld and the fifth episode of World 2 of Dreamworld. This episode was released on 5 March 2014. It was the Dreamworld equivalent to the Reality episode Gingerbread Glade.

The Witch's gingerbread house became animated by magic and turns into a one-eyed monster and moves with its legs, making her frustrated. 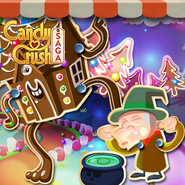