Cookie Café is the 467th episode in Candy Crush Saga and the second episode of World 94 (HTML5). This episode was released on 6 May 2020. The champion title for this episode is Playful Performer.

Tiffi eats cookies in the cafe and watches Claude perform his act. 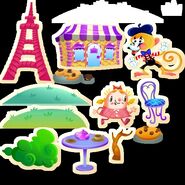