Cookie Canopy is the 351st episode in Candy Crush Saga and the first episode of World 71 (HTML5). This episode was released on 15 August 2019. The champion title for this episode is Balloon Boss.

Tiffi and Jimmy use balloons to float up to the treetops and reach the cookies on the trees. 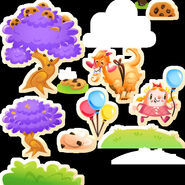