Cookie Chase is the 221st episode of Candy Crush Saga and the first episode of World 45 (HTML5). This episode was released on 11 April 2018. The champion title for this episode is Munchy Mechanic.

Pete wants to participate in the race, but his car is broken. Tiffi brings some fuel and a wheel to fix up the car. 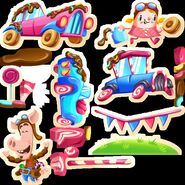 Retrieved from "https://candycrush.fandom.com/wiki/Cookie_Chase?oldid=1597259"
Community content is available under CC-BY-SA unless otherwise noted.