Coral Caverns is the 239th episode of Candy Crush Saga and the fourth episode of World 48 (HTML5). This episode was released on 4 July 2018. The champion title for this episode is Treasure Tracker.

Tiffi and Dexter discover coloured candies and pearls in what appears to be a sunken crow's nest. Tiffi takes some pearls as a souvenir.

Coral Caverns is a nearly impossible episode, with a mean of 7.07. It contains one hard level: 3573, two extremely hard levels: 3568 and 3571, and one nearly impossible level: 3565. The rest of the levels are rated "very hard" except for 3575. Overall, this episode is much harder than the previous episode, Marshmallow Mire. 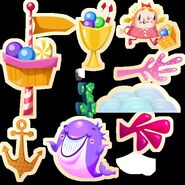 Retrieved from "https://candycrush.fandom.com/wiki/Coral_Caverns?oldid=1597295"
Community content is available under CC-BY-SA unless otherwise noted.