Coral City is the 256th episode in Candy Crush Saga and the first episode of World 52 (HTML5). This episode was released on 19 September 2018. The champion title for this episode is Sweet Sealer.

Tiffi and Milly dive into a city made of seashells to look for more gumballs to put in their fizz bottle. 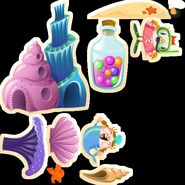