Cranberry Cottage is the 199th episode in Candy Crush Saga and the fourth episode of World 40 (HTML5). This episode was released on 29 November 2017. The champion title for this episode is Nutty Nutcracker.

Jean-Luc is waiting for Tiffi to open all these presents but can't seem to find her. Tiffi surprises him by popping out of one of the boxes. 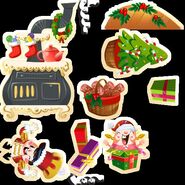 Retrieved from "https://candycrush.fandom.com/wiki/Cranberry_Cottage?oldid=1718560"
Community content is available under CC-BY-SA unless otherwise noted.