Crazy Crossing was the 7th episode in Dreamworld and the first episode of World 2 of Dreamworld. This episode was released on 23 January 2014. It was the Dreamworld equivalent to the Reality episode Bubblegum Bridge.

A star brings you into World Two. This time, Tiffi tries to steal candies from the Bubblegum Troll.

Crazy Crossing was considered a somewhat easy - medium episode, with a mean of 3.47, despite having four hard levels: 84, 89, 91, and 95. Overall, it was much easier than the previous episode, Twilight Egg, but it had the same difficulty as its reality counterpart Bubblegum Bridge!

Episode background (animation)
Add a photo to this gallery

The star in effect 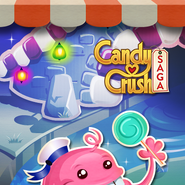 Retrieved from "https://candycrush.fandom.com/wiki/Crazy_Crossing?oldid=1595050"
Community content is available under CC-BY-SA unless otherwise noted.