Cream Carnival is the 475th episode in Candy Crush Saga and the fifth and final episode of World 95 (HTML5). This episode was released on 27 May 2020. The champion title for this episode is Bold Baker.

This is the first episode to be soft-released after 25 May 2020. From now up to Episode 487, most players not on the Windows platform will not be able to see this episode unaffected by April Fools 2020.

Tiffi and Giggles practice their throwing skills by throwing cream pies at the spinning wheel. 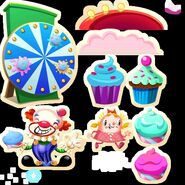