Crumbly Coast is the 61st episode in Candy Crush Saga and the first episode of World 13 (HTML5). This episode was released on 1 April 2015. The champion title for this episode is Coco Kahuna.

Before episode:
A Big Foot named Barry gets his hand stuck into the bottle with some cookies in it.
After episode:
Tiffi brings a tool, and pull the bottle to use a tool to make his hand free from the bottle. Then he begins to eat cookies from the jar.

Crumbly Coast is a somewhat easy episode, with a mean of 3-. However, it has one somewhat hard level: 902, and one very hard level: 893. Overall, it's much easier than the previous episode, Coco Crossroads. 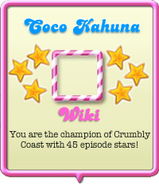 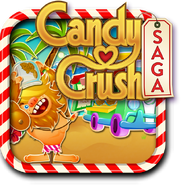