Crystal Candy is an overlaying blocker in Candy Crush Saga. They are officially introduced in the 308th episode, Crystal Canteen. 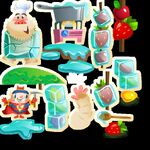 Crystal Candies seen in the background sprites for 308th episode