Cup Carnival is the 324th episode in Candy Crush Saga and the fourth episode of World 65 (HTML5). This episode was released on 22 May 2019. The champion title for this episode is Dizzy Dancer.

Tiffi and Milly are enjoying the teacup ride at the carnival. 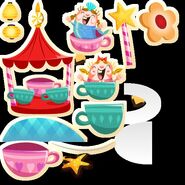