Cupcake Circus is the 13th episode in Candy Crush Saga and the third episode of World 3 (HTML5). This episode was released on 30 August 2012. The champion title for this episode is Cupcake Showman.

Before episode:
The player encounters an acrobat dressed as a clown named Giggles, who is desperate to find cotton candy for the children.
After episode:
Tiffi notices that the pink clouds are made of cotton candy. She borrows a balancing stick to reach it.

Cupcake Circus is an easy episode, with a mean of 2.73. It has one somewhat hard level: 177, which used to be the easiest level in the episode before a complete redesign. Overall, this episode is easier than the previous episode, Pastille Pyramid. 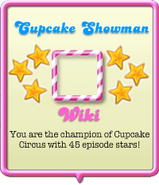 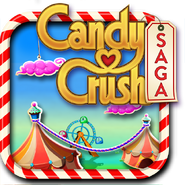