Curly Court is the 274th episode in Candy Crush Saga and the fourth episode of World 55 (HTML5). This episode was released on 28 November 2018. The champion title for this episode is Bonbon Bowler.

Candy Cane Curl have grown over various candies around the factory. Tiffi helps Hilda by removing the curls to gain access to those candies and uses them to power the factory. 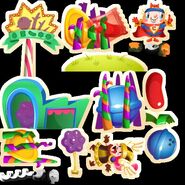 Retrieved from "https://candycrush.fandom.com/wiki/Curly_Court?oldid=1626537"
Community content is available under CC-BY-SA unless otherwise noted.