The Daily Booster Wheel is an ongoing in Candy Crush Saga released on November 27, 2013, upon the release of Dreamworld. Its icon is located on the bottom middle of the screen, or in the case of the mobile version, the top left of the screen. When a player clicks it, the wheel will automatically spin. The player can press the "Stop Wheel" button at any time, causing the wheel to slow down. When the wheel fully stops, whichever booster the wheel lands on, the player will receive one of it. The Daily Booster Wheel is available once a day and requires an internet connection.

On iOS and Android: the player must be connected to the internet to spin the wheel. Since August 2014, the daily booster wheel requires a network connection (Facebook / King.com). Without a connection, players are no longer able to obtain boosters without paying for them. However, some mobile players may still suffer a glitch that will not cause the booster wheel to return, but instead erase all of their progress, forcing them to start again at level 1.

Mouse-over text on Daily Booster Wheel: Spin and get a free booster!

Description of Daily Booster Wheel: Spin the wheel for free, once every day for a chance to win the Jackpot, a big box of sweets, containing 3 of each of the following: Lollipop Hammer, Colour Bomb, Jelly Fish, Free Switch, Striped & Wrapped, Coconut Wheel, and Lucky Candy.

Information: One spin daily; booster won is free. Booster is not refundable; cannot be exchanged, transferred or used in other games.

Graphically, one out of eight equal sectors represents the Jackpot. If a player lands on the Jackpot, he/she will be rewarded with 3 of each reward from the rewards list, for a total of 21 boosters. As the jackpot claim prize icon was the boosters instead of the box on HTML5, it will be rewarded with only 1 of each reward. It was replaced by three stars as of September 2019 until the Golden Booster Wheel was added.

Occasionally, the second wheel reveals itself once you claim your reward on the Daily Booster Wheel. The wheel will flip over with a different colour scheme. However, a spin costs some gold bars on it. The rewards are mainly the same, but the jackpot is replaced with three stars. If the wheel stops on the stars, you will be able to collect bonus gold, depending on how many consecutive times you land on the stars, up to a whopping 500 gold bars by making three hits on the stars in a row.

It is no longer available at the moment, where it uses the same reward list (other than Jackpot) as the standard wheel, and each spin costs 3 gold bars. On the mobile version, it may appear as a limited weekend offer, with the Colour Bomb being doubled, and the spinning price at 6 gold bars.

As of late October 2019, it is replaced by the Golden Booster Wheel, on HTML5 only, with the boosters being doubled, including a UFO and a Party Popper Booster and instead, it was gold. Also, this time, there are no gold bars, instead of the jackpot.

Description of Second Daily Booster Wheel: Get up to 500 Gold Bars! Get three stars in a row to collect your shiny golden prize.

Information: Each turn of the wheel is a new chance to win. If you miss the star field on the second or third try, you win collect your earnings and the prize ladder will go back to the first step.

From mobile (HTML5) v1.73 until a certain update in 2020, this wheel appeared upon level failure if the device is connected to the internet. Instead of simply giving up, the player can spin this wheel, get extra moves and continue playing. Each spin costs seven gold bars, however, every 48 hours, there was a free spin chance without gold cost. If the player gets extra moves, it is immediately used, and the player can continue, otherwise, the player gets another booster and can spin again for seven gold bars or tap the exit button and inevitably fail the level. The chances of getting extra moves were exactly 50/50 because there are four extra move boosters and four other boosters.

In 2020, the feature of waiting for free spins was removed, making spending 7 gold bars to spin became mandatory. The Win Moves Wheel that appears upon failing the level was then later removed which makes the "Oh No!" screen now similar prior to v1.73 of mobile (HTML5) version of the game or the introduction of Win Moves Wheel where the screen only offers the option to spend gold for extra moves or end the game to fail the level (which is denoted by the X button), and replaced with an optional ad guaranteeing the rewarding of extra moves.

On later HTML5 (mobile only) versions, this wheel will appear upon level failure if the device is connected to the internet. Instead of simply giving up, the player can watch an ad and then spin this wheel, get extra moves and continue playing. It is currently unknown if this is available on the Windows 10 app. Currently, one can obtain six extra moves by watching three ads.

Past Variations of this Wheel[] 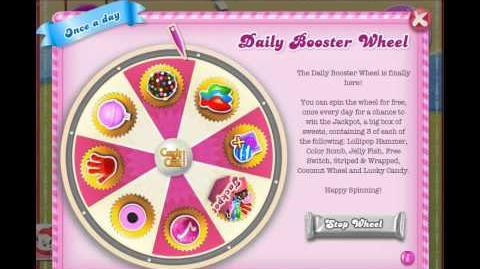 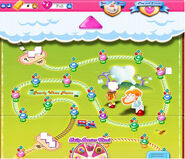 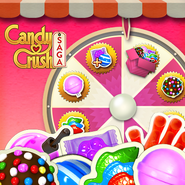 An art of Daily Booster Wheel from Facebook page 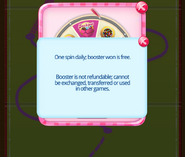 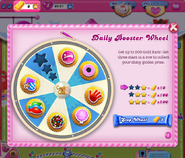 Description of the second wheel (mobile)

The fair's in town! (mobile)

But it may cost gold 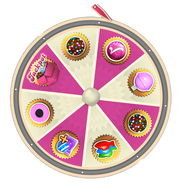 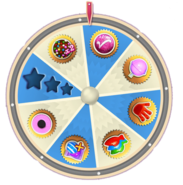 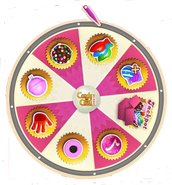 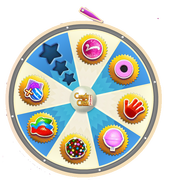 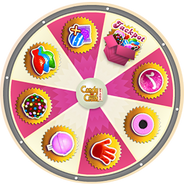 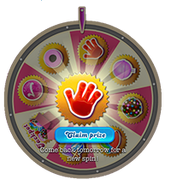 Daily Booster Wheel seen in the icon (Striped and Wrapped).