Delectable Depths is the 63rd episode in Candy Crush Saga and the third episode of World 13 (HTML5). This episode was released on 29 April 2015. The champion title for this episode is Tickle Troll.

This was the last episode that needs to be unlocked by receiving three friends on the old HTML5 version.

Before episode:
A jellyfish named Jem has her tentacles tangled.
After episode:
Tiffi uses a free switch to untangle her tentacles.

Delectable Depths is a somewhat easy episode, with a mean of 3.27. It contains two hard levels: 925 and 935, and two extremely hard levels: 929 and 930. However, the rest of the levels are relatively easy. Overall, this episode is still harder than the previous episode, Polka Park. 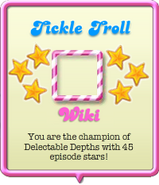 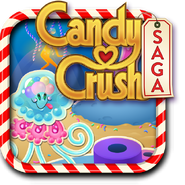