Delicious Depths is the 312th episode of Candy Crush Saga and the second episode of World 63 (HTML5).

Tiffi uses scissors to cut down the long coral weeds that are blocking Dexter's way. 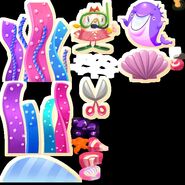 Retrieved from "https://candycrush.fandom.com/wiki/Delicious_Depths?oldid=1409615"
Community content is available under CC-BY-SA unless otherwise noted.