Not to be confused with Delicious Drifter, the champion title of the 189th Reality episode, Peppermint Portal.

Delicious Drifts is the 18th episode in Candy Crush Saga and the third episode of World 4 (HTML5). This episode was released on 23 November 2012. The champion title for this episode is Polar Explorer.

Before episode:
The episode takes place in a polar climate, judging from the surroundings. In the background there seems to be something like an igloo from marshmallow. Tiffi sees that Paul the polar bear is upset that his jelly fish is frozen in ice.
After episode:
Tiffi gives Paul a burning candy that makes him breathe fire and defrost the frozen jelly fish.

Delicious Drifts is an easy episode, with a mean of 2.07. However, it contains two medium levels: 249 and 257. Overall, this episode is much easier than the previous episode, Chocolate Barn.

This episode also contains level 252, which you could play indefinitely after breaking through most of the blockers. However, because of the removal of timed levels, this is no longer the case and said level is now a moves level.

Why so down, Mr Bear?

My jelly fish is frozen solid in this ice cube! 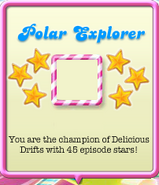 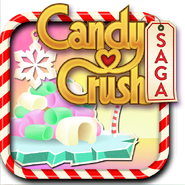