Delightful Desert is the 241st episode in Candy Crush Saga and the first episode of World 49 (HTML5). This episode was released on 11 July 2018. The champion title for this episode is Dessert Dancer.

Tiffi and the Genie find three strange-looking candies in the desert; one red, one yellow and one green. 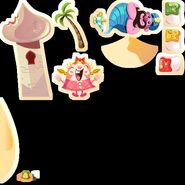