Dinosaur is a minor character in Candy Crush Saga. He is encountered in the 21st episode, Jelly Jungle. Before introducing level 291,he is scared because he has no place to hide, and a scary pterodactyl is out to get him, flying around in the sky. After completing level 305, Tiffi grabs a huge mystery egg and plops it on top of the small dinosaur, confusing the predator, who eventually flies away, allowing the dinosaur to safely walk around again.

In the 21st Dreamworld episode, Jurassic Jaws, he is biting on play teeth which causes Tiffi to laugh.

Jelly Jungle (after story)
Add a photo to this gallery

Jurassic Jaws (animation)
Add a photo to this gallery 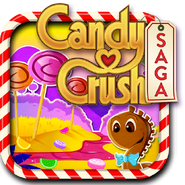 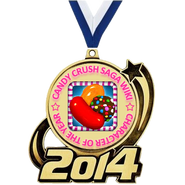 He becomes the character of the Year 2014 (voted by fans)
Add a photo to this gallery
Retrieved from "https://candycrush.fandom.com/wiki/Dinosaur?oldid=570879"
Community content is available under CC-BY-SA unless otherwise noted.