Not to be confused with Divine Diver, the champion title for the 70th and 117th Reality episodes in the game: Luscious Lagoon and Sprinkle Sea respectively.

Divine Diner is the 98th episode in Candy Crush Saga and the third episode of World 20 (HTML5). This episode was released on 6 January 2016. The champion title for this episode is Waffle Waitress. 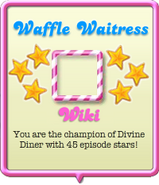 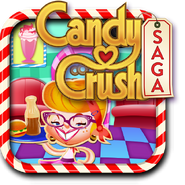