Easter Bunny Hills is the 6th episode in Candy Crush Saga and the first episode of World 2 (HTML5). This episode was released on 10 May 2012. The champion title for this episode is Chief Egg Layer.

Before episode:
Benny the Easter bunny is stuck in a pool of chocolate, and says, "I am stuck in the chocolate. Please, help me!".
After episode:
Tiffi blows a bubble from the bubblegum she's chewing that encases Benny and brings him up out of the chocolate.

Easter Bunny Hills is an easy episode, with a mean of 2.67. Most levels are easy, though there are three medium levels: 73, 78 and 79. At first, levels 70 and 79 were very hard, but due to major nerfs, they are now easier. Overall, this episode is much easier than the previous episode, Minty Meadow.

An Easter Bunny in chocolate?

I am stuck in the chocolate. Please, help me!

I will help you get out of the chocolate.

I am off the chocolate.

Thank you for helping me! 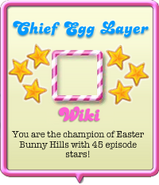 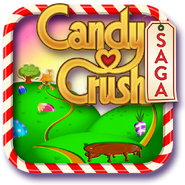