Edible Empire is the 259th episode in Candy Crush Saga and the fourth episode of World 52 (HTML5). This episode was released on 3 October 2018. The champion title for this episode is Ginger Glazer.

Tiffi and Denize redecorate their empire city with chocolate and cream. 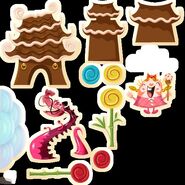