Eggnog Emporium is the 53rd episode in Candy Crush Saga and the third episode of World 11 (HTML5). This episode was released on 10 December 2014. The champion title for this episode is Eggnog Empress.

Before episode:
Jean-Luc the nutcracker's jaw is broken and he is in a lot of pain.
After episode:
Tiffi fixes his jaw by some sugarplum magic.

Eggnog Emporium is a somewhat easy episode, with a mean of 3.07, having one hard level: 772, and one extremely hard level: 783. Overall, this episode is much harder than the previous episode, Chewy Citadel. 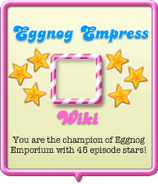 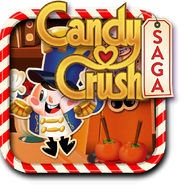 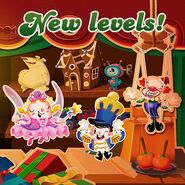