This page may require updating as new events and themed events are introduced regularly, and the data might be selective or out of date.

An event may occur when the player joins the game on specific periods. One or more events can be active in the game, and some events are ongoing with no set end date. The completion of events usually yield stocked boosters, booster/life passes, and even gold.

Most events occur on the app version; only a few are still present on Flash. As of 2021, all events occur only on the HTML5 (mobile) version, and one can only participate in events after they have completed a certain number of episodes, especially the first two episodes. Note that boosters obtained through events are clientside on mobile and serverside on web, and the player might only receive the event on mobile and not on the web.

Many of the events have a common objective. Some events are ongoing, while others are specific to a certain period or even a certain day. 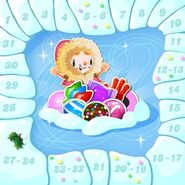