Not to be confused with Extra Time.

Extra Time Candy was a type of special candy that was only seen in timed levels. These candies looked like regular candies and can have any of the six regular colours, but they are glowing (in Flash version only) and have +5 written on them.

Alongside with timed levels, they were removed on HTML5 on 2 May 2018, as they do not appear in any other level types.

Extra time candies appeared in any timed level, and in later levels appeared at the start screen. They spawned when a match subsequently results in three cascades. If the cascades were still in progress, it came down after every four cascades. However, it didn't spawn if the timer is already at zero, even if the current cascade has not ended yet.

It acted like a regular candy, as it had to be matched for its effect to work. When matched, it gave the player five extra seconds, or reset the timer if it was less than 5 seconds short. For instance, if the time limit for that level is 60 seconds, and you match an extra time candy with 57 seconds left, your timer won't increase to 62 seconds, but only reset to 60.

When Sugar Crush took place on timed levels, any extra time candies left on the board when the time runs out were converted into wrapped candies and were set off.

In some levels, extra time candies were vital, especially on levels that had a short time limit and a high target score. 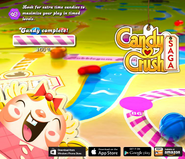 How to pass timed levels

Level 252 (HTML5) with a few extra time candies, the upmost green one being glitched black