Fancy Festival is the 334th episode in Candy Crush Saga and the fourth episode of World 67 (HTML5). This episode was released on 26 June 2019. The champion title for this episode is Glamorous Guest.

Tiffi, Mr. Yeti, Jean-Luc, Bubblegum Troll, Cherry Baroness and Milly have a huge party to celebrate level 5000, the second episode finale to be the exact thousand. 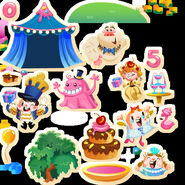