Flan Falls is the 307th episode in Candy Crush Saga and the second episode of World 62 (HTML5). This episode was released on 27 March 2019. The champion title for this episode is Brûlée Blaster.

Allen's spaceship has crashed again. Luckily, he and Tiffi landed on a jelly-like substance and bounced to safety. 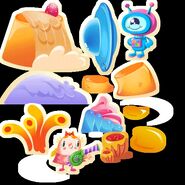