While Bobby and Tiffi are fishing, they crack open chocolate stones that are revealed to have cherries in them. 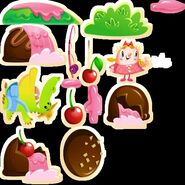 Retrieved from "https://candycrush.fandom.com/wiki/Flavour_Falls?oldid=1412432"
Community content is available under CC-BY-SA unless otherwise noted.