Flossy Forest is the 306th episode in Candy Crush Saga and the first episode of World 62 (HTML5). This episode was released on 20 March 2019. The champion title for this episode is Cotton Cutter.

Jean-Luc has an umbrella that matches the colour of his outfit. Tiffi uses her scissors to cut pink floss from the trees and make herself a pink umbrella to match her own outfit. 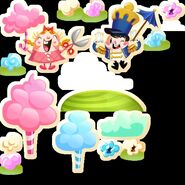