Flowering Fields is the 423rd episode in Candy Crush Saga and the third episode of World 85 (HTML5). This episode was released on 29 January 2020. The champion title for this episode is Tulip Tender.

Tiffi uses a device to find Dutch Girl's waffle hidden in the tulips. 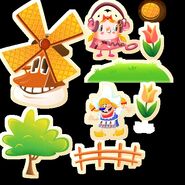