Fluffy Fort is the 395th episode in Candy Crush Saga and the fifth and final episode of World 79 (HTML5). This episode was released on 20 November 2019. The champion title for this episode is Trendy Tailor.

Tiffi cuts cotton off the trees with her scissors to make warm coats for her and Milly. 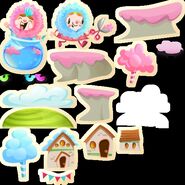