Fondue Fort is the 205th episode in Candy Crush Saga and the fifth and final episode of World 41 (HTML5). This episode was released on 3 January 2018. The champion title for this episode is Clumsy Conjurer.

Magic Mort was performing magic at the fort when he accidentally lost control and turned the fort into fondue. Tiffi catapults strawberries at the fort and plugs it shut in style. 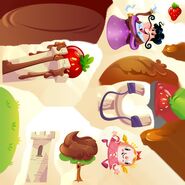 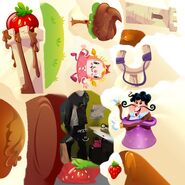