This article is about the character in Glazed Grove. If you are looking for the frog candy that first appeared in Cereal Sea, see Candy Frog.

Freddie is a minor character of Candy Crush Saga. He is a frog and encountered in the 44th episode, Glazed Grove. Before introducing level 636, he is very hungry. After completing level 650, Tiffi gave and fed him red jelly beans to make the frog strong and chubby.

In the 185th episode, Peppermint Pond, Tiffi and Freddie are in the forest with pink trees with stars at the top and colorful cookies.

In the 44th Dreamworld episode, Nocturnal Nuisance, he opens the door of the house when Tiffi throws a red candy to hit the door and looks himself for a while. Finally, he went into the house and closed the door.

Meet the frog (before story)

I will give the frog a new look (after story)

Sweet! I have become chubbier and muscular! (after story) 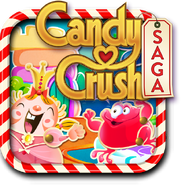