Frozen Fair is the 231st episode in Candy Crush Saga and the first episode of World 47 (HTML5). This episode was released on 23 May 2018. The champion title for this episode is Dairy Dealer. 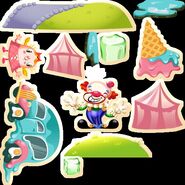