Frozen Fishland is the 214th episode in Candy Crush Saga and the fourth episode of World 43 (HTML5). This episode was released on 28 February 2018. The champion title for this episode is Hot Hero.

The waterfall and the jelly fishes are all frozen. Tiffi uses a blow-dryer to melt the ice. 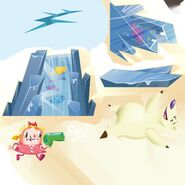 Retrieved from "https://candycrush.fandom.com/wiki/Frozen_Fishland?oldid=1651429"
Community content is available under CC-BY-SA unless otherwise noted.