Fruity Fairground is the 121st episode in Candy Crush Saga and the first episode of World 25 (HTML5). This episode was released on 15 June 2016. The champion title for this episode is Sugary Strongman.

Tiffi ate the apples to help Genie Jellybeanie lighten his loads and continue performing as a strongman. 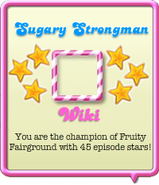 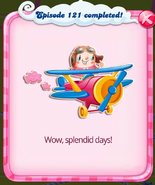