Fruity Fields is the 295th episode in Candy Crush Saga and the fifth and final episode of World 59 (HTML5). This episode was released on 13 February 2019. The champion title for this episode is Seedy Spotter.

Tiffi and Bobby harvest seeds from the fruit on the trees. 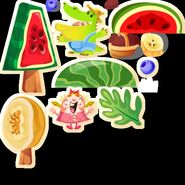