Fruity Forest is the 376th episode in Candy Crush Saga and the first episode of World 76 (HTML5). This episode was released on 9 October 2019. The champion title for this episode is Goopy Grenadier.

Tiffi and Claude dip candies and fruit in the chocolatey lake. 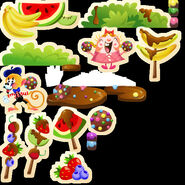