Fudge Islands is the 25th episode of Candy Crush Saga and the first episode of World Five. This episode was released on 23 April 2013. The champion title for this episode is Pastry Chef.

Fudge Islands is a somewhat easy episode. It contains levels of almost every difficulty with the exception of none, extremely hard, nearly impossible, and variable. It has four somewhat hard - hard levels: 353, 357, 358 and 360, and one very hard level: 363. Fortunately, the other levels are quite easy. Hence, it breaks the trend of episodes being rated easy, and it is harder than the previous episode, Pearly White Plains.

Thanks for helping me find my spoon! (after story)
Add a photo to this gallery 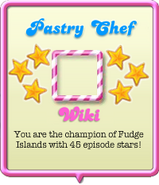 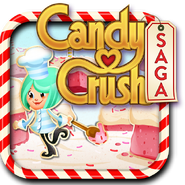 Old mobile map
Add a photo to this gallery

Retrieved from "https://candycrush.fandom.com/wiki/Fudge_Islands?oldid=1484825"
Community content is available under CC-BY-SA unless otherwise noted.